This study aims to reconcile the 2 perspectives on wintertime atmospheric variability in the North Atlantic – European sector:

Eddy momentum flux convergence from transient eddies creates a deep barotropic eddy-driven jet in mid latitudes. This is not always clearly separated from the subtropical jet. The leading pattern of variability in eddy driven jet is a latitudinal shifting (30-40% monthly variance) related to phase of the NAO. We would expect jet and weather regimes to be associated but there is a mismatch. Also, flow regimes tend to have characteristic Rossby Wave breaking patterns – pushing the jet polewards/equatorwards. 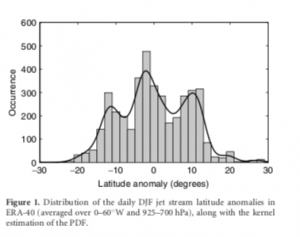 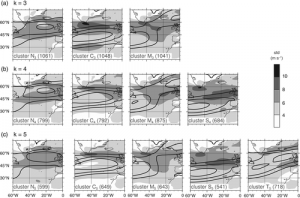 The 4 cluster analysis identifies a new jet configuration (Mixed) along with the previous identified ones (Southern, Central and Northern). A persistence analysis shows that this new configuration is not merely a transition pattern but a jet regime in its own right. 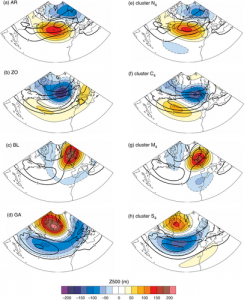 This study uses methods such as filtering and clustering that we may apply to our own research in the future. It ties in well with the work on jet stream interactions and Rossby waves. It would be good to find links between the upper level steering flow and the eddy driven jet stream. We would like to find out if a similar analysis has been carried out of the upper level jet stream and would it yield similar results.