I attended EMS2018 last week in Budapest, where I presented a talk on my on-going work with Conor and Emily Gleeson from Met Éireann. The talk was titled “An Evaluation of Integrated Cloud Condensate in the HARMONIE-AROME NWP Model” as part of the session on cloud-aerosol-radiation interactions.

I used MÉRA for the data and examined the vertically integrated cloud water (ICW) and the vertically integrated cloud ice (ICI). I investigated the model spin-up and found that for both variables the model requires time to spin-up and therefore for the remainder of my project I used the forecast with a long lead time for the hours between 01 UTC and 09 UTC.

I also compared the MÉRA data to a satellite dataset – KMNI MSGCPP Condensed Water Path (CWP; CWP=ICW + ICI). There is generally good agreement between the satellite and MÉRA CWP. However, in summer the error is large and MÉRA tends to produce too much CWP.

I also looked at some individual case studies in which initial results suggest the error might be related to cloud type. Initial analysis suggests fronts may overestimate CWP and CWP may be underestimated for convection.

Members of the group recently took part in the 141st European Study Group with Industry (ESGI), held at UCD in June. We were part of the team working on the problem posed by ESB-Trading (Electricity Supply Board).  With the upcoming launch of I-SEM, ESB-Trading have increased interest in accurate prediction of output from their wind farm portfolio.

They provided output for a number of their wind farms for 2016 and 2017, and also forecast data from a third party. We analysed the accuracy of the forecast using standard skill scores and also looked at the influence of wind direction on forecast accuracy. We also employed some Linear-Least Squares (LLS) post-processing to try to improve the forecasts.

We worked alongside a group from Politecnico di Milano, who used their expertise in functional data analysis to study the data.

At the end of the week, a presentation was made to ESB and other participants and a report was also produced (which should be published shortly).

I attended EGU2018 in April 2018 where I presented a poster titled Representation of Wind-Solar Correlations in Reanalyses.  This was included in the poster session for ERE3.1: “Energy meteorology and spatial modelling of renewable energies.”

This examined the representation of the relationship between 10m wind speed and global shortwave radiation (SW) on daily timescales in both observations and three different reanalyses.  It was found that all three reanalyses (ERA-Interim, MERRA-2 and MÉRA) tend to overestimate the strength of the negative correlation between daily mean 10m wind speed and daily total SW. The use of MÉRA, which is a high-resolution dataset (2.5km spacing), highlights spatial features of the correlation patterns. These appear to be influenced by the underlying model orography.

I attended many interesting talks. These included SC Pryor’s talk about using WRF simulations to study regional climate impacts from wind turbines, Daniel Drew’s talk about a case study of wind ramping and looking at how well it was predicted by UK Met Office models and also a talk by Florian Pantillon about ensemble forecasting of wind gusts over Germany. 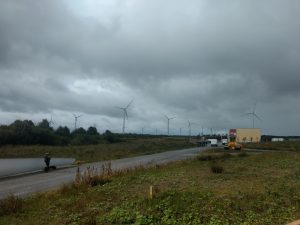 As part of a recent ESIPP team away day, we visited Mount Lucas wind farm in Co. Offaly which is part of Bord na Móna’s wind farm portfolio. We received a thorough and interesting talk from Nick Norris about the planning, construction and operation of the wind farm. The wind farm sits on 1,100 hectares of cutaway bog with a total capacity of 84MW, coming from 28 Siemens turbines at a hub height of 100m. There is also a 100m tall met mast located on the wind farm, providing wind speed measurements at hub height at the location.