A question arose in regard to the meaning of certain short wave radiation variables, in particular when they are described at the top of the atmosphere (TOA) or at the surface in clear sky conditions.

A good document describing the TOA and clear sky conditions in the ECMWF model can be found here.  The TOA in this model, corresponds to the 0 hPa pressure level. While NASA say that TOA can be described arbitrarily as 400,000 ft (about 120 km) above the surface of the Earth, or in meteorological terms as the location where pressure is 0.1 mb.

Clear sky is defined in the ECMWF model as as a hypothetical atmosphere where no clouds are present, however the same atmospheric conditions of temperature, humidity, ozone, trace gases and aerosol exist. So the short wave radiation at the Earth’s surface in clear sky conditions is that which would be present if all clouds were removed. In clear sky conditions, when the solar radiation passes through the Earth’s atmosphere, it is reduced only due to scattering and absorption. The radiation that is not scattered or absorbed will reach the Earth’s surface as a direct (beam) radiation, while the scatter radiation that reaches the ground is called diffuse radiation. The scattering and absorption of the solar radiation can be attributed to ozone, water vapor, aerosol and dry-air particles in the atmosphere.

Figure from description of the ECMWF model  below showing the short and long wave radiation entering the top of the atmosphere (TOA) and being scattered and absorbed before reaching the Earth’s surface. 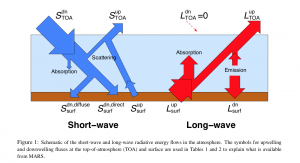 Summer daily average accumulated short wave radiation at the TOA and at the Earth’s surface in clear sky conditions are shown below. Data from MERRA2. 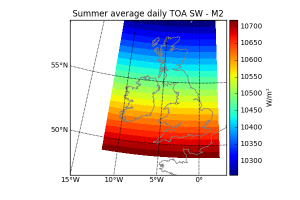 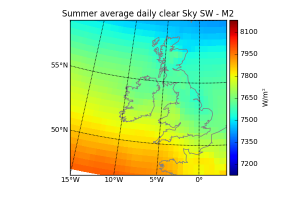 I recently attended EGU2018 in Vienna, where there was a week of interesting talks on a wide variety of subjects within the geoscience community. Here are my notes on some of the talks.

I presented a poster in the ‘Energy meteorology and spatial modelling of renewable energies’ session titled: A spatial analysis of shortwave radiation over Ireland. In the poster I briefly show the results of standard skill scores to test the accuracy of reanalysis datasets to estimate shortwave radiation (SW) compared to station observations. Then I show the SW spatial pattern observed in each of the reanalyses and in satellites. The east-west variation highlighted by the land-sea contrast is seen in observations and is captured well by MÉRA and ERA-Interim. It is less pronounced in MERRA2. As an initial assessment of the model parameters contributing to the different representation of SW, I examined the spatial pattern of “daylight only” clouds.

I gave a short talk at the weekly Energy Institute seminar on 21st March 2018 in UCD. My presentation was titled “Shortwave Radiation in Reanalyses: Skill Scores and Spatial Patterns”. I briefly discussed my ongoing research surrounding the use of reanalysis datasets as a representation of past climatology for shortwave radiation (SW) in Ireland. I presented results on the accuracy of three reanalyses; MERRA2, ERA-Interim and MÉRA, in estimating daily mean temperature and daily total SW compared to station observations using standard skill scores.

I then talked about how postprocessing can provide improvements to these reanalysis skill scores for SW. We found large improvements in mean error and RMSE even with a simple adaptive linear least squares method.

I also presented initial results on the SW spatial patterns seen around Ireland in each of the three reanalyses. The interesting east-west variation in SW highlighted by the land-sea contrast seen in observations (satellite) is captured well by MÉRA and ERA-interim and it is less pronounced in MERRA2.

My poster was titled “An Investigation of Systematic Errors in Solar Radiation for Reanalysis Datasets”. In it I presented the results of standard skill scores of reanalysis datasets to estimate shortwave radiation (SW) compared to station observations in Ireland. Reanalyses tend to overestimate the SW. However, results also show that a simple linear least squares post processing method can reduce the systematic bias and RMSE for SW in reanalyses. I also presented initial analysis of the spatial representation of SW in reanalyses. An interesting east-west variation in SW is observed which is highlighted by the land-sea contrast.

Many thanks to the judges for choosing my poster as winner of the best poster competition.