In Germany, 31% of the largest error in photovoltaic day-ahead power forecasts for the years 2013-2014 were associated with fog and low stratus events. A detection algorithm for low stratus risk (LSR) is developed and applied as post-processing to the NWP model forecasts. The aim of the detection algorithm is to supply day-ahead warnings and support the decision-making process of the TSOs.

The LSR algorithm considers the lowest model levels where low cloud can be produced by the model (~800hPa). Thresholds for the inversion strength and the saturation deficit determine the behaviour of the LSR. With strict criteria, the LSR gives conservative estimations of the low cloud cover (comparable to the operational NWP output) and with less constrictive criteria, broader areas are marked to be potentially affected by low stratus. Even though the LSR inherits the errors of the underlying NWP model, the resulting LSR serves as additional information to the likelihood of low stratus occurrence (fig 1.).

Validation is performed against the Nowcasting Satellite Application Facility (NWCSAF) cloud type classification product. The combination of thresholds for the LSR is dependent on the users different sensitivity to risk as validation produces a large range of results in critical success index (CSI) and false alarm ratio (FAR).

Application in our research:

A document summarising gridded datasets which could be used as part of our research has been produced.  This considers both atmospheric reanalysis datasets and gridded climate datasets.   Information regarding the resolution, temporal coverage and unique features of the datasets are given.

A reanalysis is a dataset generated using weather observations and a modified forecast model to produce a physically consistent gridded representation of past weather events.

Gridded climate datasets do not involve the use of any dynamical models.  These use statistical techniques, such as interpolation, to produce data on a regular grid, from irregularly distributed observations.

Recent reanalyses which we have been using in our research have been described. These include MÉRA from Met Éireann, MERRA2 by NASA and ERA-Interim by ECMWF. Gridded climate datasets (such CRU and E-OBS) have also been described.

The three centres responsible for producing global reanalyses (ECWMF, America and Japan) are covered, outlining the progression in resolution and technology used for each subsequent reanalysis.

This article assessed the relationship between electricity demand and the availability of wind power, relating both of these to weather patterns affecting the UK region.

Like the previous article by some of the same authors, also covered in the our journal club (https://metclim.ucd.ie/2017/08/journal-club-18-07-2017/), the current article focused on the winter season, although for different reasons: the winter season encompasses both the highest electricity demand (therefore ED) and the highest variability in wind capacity factor (WP), when comparing with the rest of the year (see Figure 1 of the article).

Due to its intermittent nature, highest on winter, wind power has been questioned as a safe provider of electricity during high and peak electricity demand periods. Understanding what atmospheric patterns are associated with both winter wind power production and electricity demand will offer security to the energy grids by way of securing reserve power production – this can be achieved through forecasting of the atmospheric conditions associated with different WP and ED.

This is the motivation and rationale of the article.

As we can see in the figure bellow (left plot), for most of the ED percentiles, there is linear inverted relationship between WP and ED; for the peak ED though, there is an upturn, meaning that the highest percentiles of ED occur when WP starts to increase again. This same plot also shows us that the higher the meridional pressure difference (two boxes, one north of the UK, another south), the higher the WP. This pressure difference can be used to identify the general direction of the winds, and therefore the general temperature of the airmasses – e.g. winter air masses coming from the East are generally colder than airmasses coming from the West. This pressure difference can also be interpreted as a regional proxy of the NAO index.

If we look at the right plot of the same figure, we can see that the colder the air temperature, the higher the ED, which can probably be explained by the higher levels of heating – therefore associating temperature (therefore T) with ED, for the UK region. 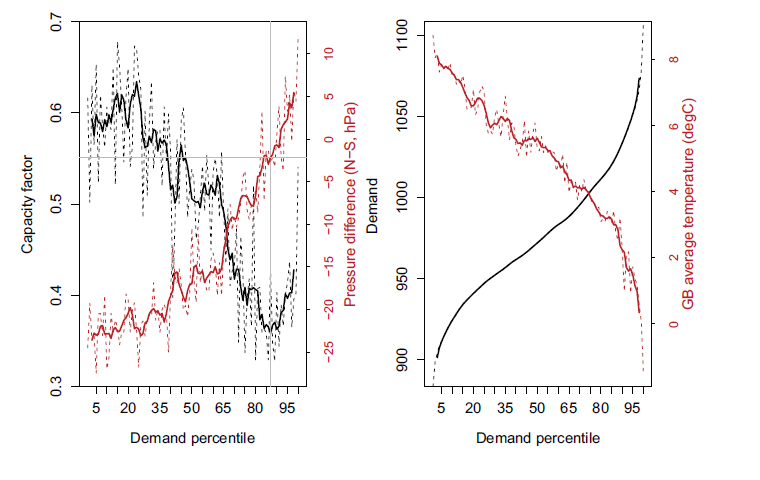 The authors then got the Sea Level Pressure (MSLP), T and WP fields (all from ERA reanalysis) associated with high ED (~30 years of real UK data) and applied a clustering technique (k-means) to see the pressure, temperature and WP patterns associated with those ED conditions (the last two fields, T and WP, are presented as anomalies and not absolute values). As one can see in the Figure 2, bellow, the authors identified 4 clusters with frequencies between ~20% and ~30% of occurrence each. All of the identified clusters demonstrate high pressure systems, although in different regions of Europe. The location of the pressure centers will condition the degree and extent of temperature anomalies in the UK and neighbours. Regarding WP, the picture is not that “consistent”, as expected from the previous plot – two of the clusters are associated with lower than normal WP, one associated with average WP, and one associated with above average WP (Cluster 1). Note: In this work, the authors assumed a uniform and geographical balanced distribution of wind farms, although they also performed other types of sensitivity analysis (using OBS of WP instead of reanalysis; averaging WP over different regions of the UK, both onshore and offsore) that guaranteed that the results are consistent, namely the ED-WP relationship.

One also has to notice that 3 of clusters/weather types show that in those weather conditions not only the UK but also its neighbours suffer from T and WP anomalies, which might make inter-national electricity balancing harder and/or more expensive, specially if those conditions are not predicted sufficiently ahead of time.

On the other hand, 3 of the clusters (not all the same as the previous) show some advantages on continental scale balancing of power, as southern Europe faces opposite anomalies to northern Europe, at least regarding WP.

Figure 2: Clusters of MSLP (left column) and T (middle) and WP (right) anomalies, obtained by K-means technique on those variables, when the ED is high.

Eadaoin, João and Seánie had the chance to see Hazel Thornton presenting this work at the European Meteorological Society Conference in Dublin, September 2017. She also presented a follow up work of this article, which is about predicting some of these weather dependent variables using Met Office’s forecast system.