Published in the Environmental Research Letters journal, in 2017.

This article, produced by the UK’s Met Office Hadley Centre, is a follow up on previous recent research conducted by scientists from the same centre. That previous research has been able to reproduce the North Atlantic Oscillation (NAO) teleconnection signal months ahead of Winter using their seasonal forecast system, the Global Seasonal forecast System 5 (GloSea5) – this system incorporates and represents elements and subsystems of the climate system (ocean, stratosphere, sea ice) which have been shown to mediate predictable teleconnections such as the NAO.

With this forecast system shown to be useful in predicting the NAO months ahead; and with previous research pieces showing significant and relevant impacts of the NAO on components of climate over Britain, such as wind speed and temperature (which can be linked to electricity production and demand variability); this article’s objective was to assess how the GloSea5 forecast system can be useful to predict electricity demand over Britain.

So, after validating GloSea5’s forecast hindcasts’ accuracy against “observed” (ERA-interim) conditions in the UK (average), for Sea Level Pressure (SLP), wind speed and air temperature; the authors check the reliability of the GloSea5 wind and temperature hindcasts for most of Europe (Maps of reliability), where they confirm that indeed Britain (and Ireland; and some parts of Western Europe) and surrounding areas fall on the category of reliable or underconfident seasonal forecasts (regarding the usage of the GloSea5 system).

Therefore, the article proceeds to its centre objective, which is testing the forecast system, through it’s NAO predicted index, against electricity demand using real data from Britain. This NAO-electricity demand relationship is first expressed using the real-observed NAO index. We can see both in the figure bellow. 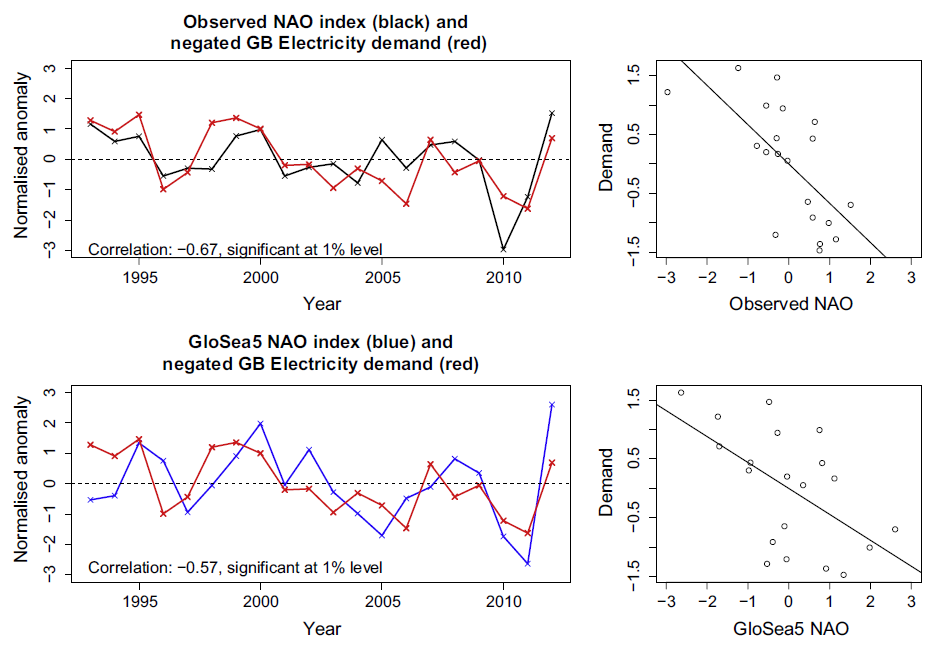 As we can see in the Figure, there is a strong negative relationship between Britain’s Winter (DJF) electricity demand and the NAO, expressed using both the real-observed NAO index (top plots) and using the 1 month-ahead predicted NAO index (bottom plots). This is the first time that seasonal forecasts of the weather dependent component of Britain’s Winter electricity demand have been demonstrated, offering multiple potential benefits to the energy industry.