These include, among others: Mean error, root mean square error (RMSE) and mean absolute error.

This report is a result of research into the use of CAPE as a representation of convective instability in the atmosphere and convective clouds. These clouds would result in differing values of shortwave radiation (SW) and could produce a possible systematic error in reanalysis data. Through post-processing this systematic error could be reduced to create a better representation of SW in reanalysis over Ireland.

Initial data analysis found no clear conclusions in correlations or analysis of large SW error events. CAPE is highly variable both spatially and temporally. As the ability of a model to accurately simulate CAPE
depends heavily on the vertical grid spacing in the critical layers, the plan is to return to this research later with a higher resolution model.

CAPE as a post-processing parameter

This article provided a description and initial data analysis of the high resolution reanalysis (MÉRA) produced by Met Éireann.  This reanalysis has been constructed with a configuration of the HARMONIE-AROME limited area NWP model at a 2.5km resolution, with ERA-Interim forcing at the boundaries.  MÉRA uses a combination of 3D-VAR and Optimal Interpolation to perform data assimilation within the model domain.

Skill scores were calculated for 2m temperature, 10m wind speed, mslp, radiosonde observations and rain-gauge observations for both MÉRA and ERA-Interim.  MÉRA offered improved performance compared to ERA-Interim both in terms of mean error and standard deviation of errors in the majority of cases. 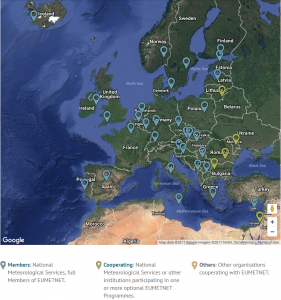 The 2017 brochure can be found here. Activities include: